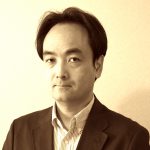 My dissertation work for B. Eng. and M. Eng. is medial engineering (ME). I got both degrees at Department of Electronics and Communication, Waseda Univ. in 1993 and 1995, respectively.

Then, I joined to Nippon Telegraph and Telephone Corp. (NTT) in 1995, and worked as a full-time software engineer in the technology development department. In 1999, I moved to a group company, NTTComware, due to the department’s split-up.

I entered into a Ph.D course at Department of Computer Science, Waseda Univ. in 2002 and finished the course in 2005. The dissertation topic is distributed context-aware systems. I spent one year and 9 months as a visiting assistant professor at Waseda Univ. as well as two months as a visiting researcher at Univ. of Oulu, Finland. I have joined to Department of Computer and Information Sciences, Tokyo Univ. of Agriculture and Technology (TUAT) since January 2007. From January 2007 to March 2011, I worked as a tenure track associate professor, and in April 2011, I got a tenure position. In addition to TUAT, I was appointed to a visiting associate professor (cooperation in education) of Japan Advance Institute of Science and Technology (JAIST) from December 2014 to March 2018. Since July 2018, I have been a professor in Dept. of Computer and Information Sciences of TUAT.